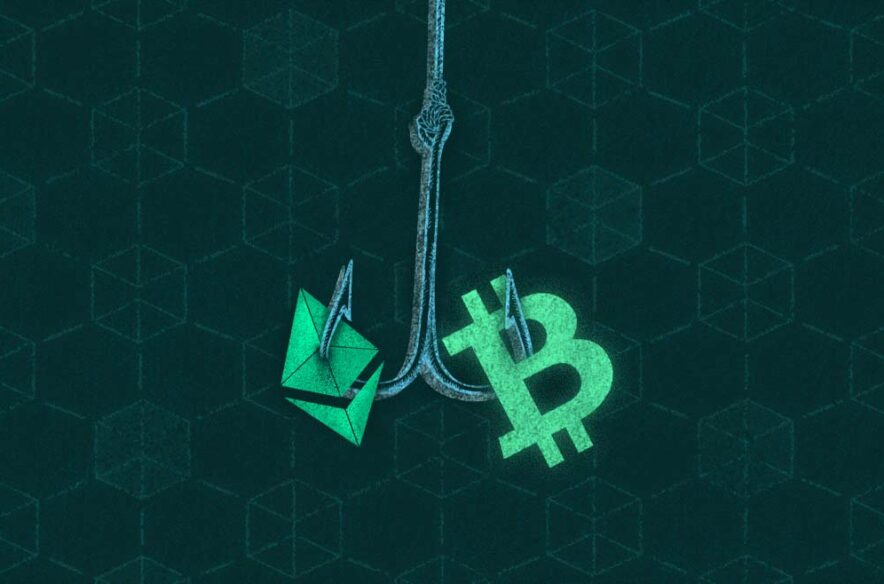 We want to help you make more informed decisions. Some links on this page — clearly marked — may take you to a partner website and may result in us earning a referral commission. For more information, see How We Make Money.

Cryptocurrency has captured America’s attention this year — and “Olympic-level scammers” have taken notice too.

With the rise in popularity of crypto and blockchain technology, there will be an influx of unprecedented cryptocurrency scams, according to William E. Quigley, a prominent investor and co-founder of the WAX blockchain.

The high-tech nature of crypto will attract sophisticated scammers capable of pulling off “Olympic-level” hacks and schemes, Quigley said during a panel discussion hosted by blockchain firm Light Node Media last month. Consider a recent “Squid Game” scam in which investors allege a new SQUID cryptocurrency token and related immersive online game were actually just an elaborate scam. Investors claim the developers disappeared after the currency skyrocketed in price and seemingly cashed out with more than $3 million.

BEFORE YOU INVEST IN CRYPTO

Experts say it’s smart to keep your crypto investments under 5% of your overall portfolio. Crypto prices fluctuate wildly by the day, and experts also say you’d be smart not to invest more than you’d be OK losing if the market dropped out altogether. Crypto investments should also never get in the way of other financial priorities like saving for emergencies, paying off high-interest debt, and saving for retirement using more conventional investment strategies.

Like it or not, crypto investors are opening themselves up to this new and evolving risk of fraud and scams. If you’ve incorporated crypto into your investment portfolio or are interested in investing in Bitcoin or Ethereum in the future, here are some common scams and red flags to look out for.

What Are Some Common Cryptocurrency Scams?

Almost 7,000 people lost upwards of $80 million in crypto scams from October 2020 through March 2021, according to the Federal Trade Commission (FTC). That’s a huge jump over the 570 cryptocurrency investment scams and $7.5 million in losses during the same months just the year before. With cryptocurrency scams on the rise, here are some patterns to look out for:

If a seemingly credible person or retail establishment claims they cannot accept any form of currency other than Bitcoin, it’s likely a scam. Bitcoin and other altcoins are a burgeoning asset class, so experts say credible institutions aren’t going to accept crypto and not also accept U.S. dollars through normal means like wire transfers, checks, credit and debit card payments, and cash.

In general, anyone demanding you pay them in Bitcoin might be trying to hoard it and capitalize on its skyrocketing value. And unlike banks, blockchain lacks common know-your-customer (KYC) protocols. That means people can open wallets without having to present valid identification, a Social Security number, or an address and contact information. Though blockchain is public and creates permanent, open-access records, people can transact on blockchain more or less anonymously — making it easy to trick you, take your money, and run.

The lack of KYC protocols on blockchain is a major question mark for its widespread use, says Jonathan Padilla, former PayPal head of blockchain strategy and CEO and co-founder at Snickerdoodle Labs, a California-based blockchain data security company that’s looking at using blockchain to give consumers ownership of their cookies and browsing data.

“With a decentralized platform, there’s really no safeguards in place to say who is a good actor and who is a bad actor,” Padilla explains. “It’s really just buyer beware.”

On a promising note, blockchain can provide a new form of transparency: Since data cannot be altered or removed on blockchain, all transactions are public record. When Colonial Pipeline paid anonymous hackers 63.7 Bitcoin (valued at almost $2.3 million) back in June, U.S. Justice Department investigators were able to track the transactions on blockchain and seize the ransom money.

“[The hackers] used a hosted wallet to move the Bitcoin around, which means [law enforcement] found them in about five days,” Padilla says. “There’s transparency built in [to blockchain], and now with the tools [coders are developing], you can use sophisticated software to do an on-chain analysis and track where these things go.”

However, it will be a matter of time before law enforcement agencies at every municipal level become familiar enough with new tools to investigate smaller-scale blockchain scams effectively. There’s currently still a possibility that crypto tokens, NFTs, and other digital blockchain assets could be used by bad actors to launder money on both small and large scales.

“That’s a very real concern,” says Padilla. “For example, you could get money from Columbia, go buy an NFT with what was previously cartel money, and it could be washed in an NFT.”

Mass-scale money laundering isn’t super prevalent, Padilla says, but the tools and the compliance framework needs to catch up fast.

“The tech is just getting where it needs to be … to be able to track where that money is coming from and where it’s going,” Padilla says. “But it hasn’t been there for the last half year,” since crypto and NFTs have exploded in popularity.

Sticking with beginner-friendly crypto exchanges like Coinbase and Gemini is one way to avoid risks that come with smaller, niche exchanges, experts say. It’s also a good idea for beginner crypto investors to stick with the two most popular cryptocurrencies — Bitcoin and Ethereum — which have a longer record of increasing in value than other new altcoins.

Like we saw with the “Squid Game” scam, sophisticated coders now have the ability to create new games and entire imaginary worlds on blockchain. And to do it as quickly as the next viral Netflix show takes off.

An easy way to scam excited blockchain newbies is to get them to buy a type of newly minted coin or token for a game. If enough people drive the price up through supply and demand, this gives the original scammers an opportunity to sell all their holdings and disappear in a move known as a “rug pull.”

Unlike bank accounts for federally regulated currency, there’s no such thing as fraud protection or FDIC insurance on the blockchain. When your money gets stolen on blockchain, the only way to get it back is for the recipient to pay you back directly. On a decentralized exchange, that’s highly unlikely. And while mainstream crypto exchanges have better fraud security measures than lesser-known exchanges, there’s still no guarantee for investors to recoup stolen crypto.

New forms of crypto are constantly being minted, and when new coins hit the blockchain it’s known as an initial coin offering (ICO). But ICOs are also opportunities for scams. A company or individual may say they have a once-in-a-lifetime opportunity to invest in a new form of crypto with guaranteed 1,000% returns. They may then pressure you into depositing a bunch of new coins into a digital wallet that’s been compromised somehow, or “pump and dump” by buying up the coin and selling when the price explodes.

Dating apps are rife with crypto scams. According to the FTC, about 20% of the money lost in romance scams from October 2020 through March 2021 was sent in the form of cryptocurrency. Scams like this involve long-distance or digital relationships in which one party pressures and convinces the other to buy or give money for some new crypto that’s really just a way to scam people out of their money.

This type of scam is as old as the internet, but with crypto there are some new implications. Just as a “normal” phishing attack would work, bad actors send emails attempting to bait recipients into clicking links and inputting their personal details — including crypto wallet key info. But unlike most passwords and usernames, you only get one private key to your blockchain wallets. This is part of blockchain’s decentralized design, ensuring that one entity cannot control your information, but it poses an issue if you ever need to change your key.

How Investors Can Protect Their Crypto

Even the most advanced and enthusiastic cryptocurrency experts understand there are many new and evolving risks in the world of crypto right now. Some have weathered scams themselves, such as the blockchain investor and entrepreneur Ian Balina, who said he lost $2.5 million after his private wallet key information was compromised by someone hacking into his Evernote account.

Balina’s story highlights the possibility of loss and fraud when dealing with such a new, volatile asset class, even for successful investors.

Financial experts advise most passive investors to keep crypto holdings to under 5% of their portfolios, and never to invest in crypto at the expense of saving for emergencies or paying off high-interest debt. If you feel ready to start investing in crypto, here are some best practices to protect your money:

For starters, watch out for some common red flags that are similar to classic money wiring scams and credit card fraud:

Know When to Use a Crypto Wallet

Just like your physical wallet, you need to protect your digital wallets from hackers. Practice good digital security habits akin to how you’d handle large sums of physical cash by putting them in a safe or FDIC-insured savings account.

There are two types of crypto wallets, typically described as “hot wallets” and “cold wallets.”

Hot wallets are hosted, or stored online. They are secure, but more susceptible to hacking than cold storage, which is when you store crypto offline on a piece of hardware. Think of cold storage as kind of like a safe in USB-drive format. It’s more secure, but if you forget your password or lose the device, you could lose access to your money forever.

Crypto held in hot wallets is not FDIC-insured like cash in the bank. You’ll therefore want to make sure that whatever platform or wallet you store your crypto in has robust security measures, including:

Keep Track of Your Wallet Keys

You only get one unique key to access your wallet, says Mac Gardner, a Florida-based certified financial planner and founder of FinLit Tech. Losing your key or having it stolen could mean losing the crypto altogether.

“You need to have a lot of control around getting access to [your wallet key.] It’s not a thing where you can forget your username and password if you don’t write it down,” Gardner says. “Each code has a process and a certain number of characters. It’s extremely personalized because of this virtual space. If it wasn’t, anybody could go in there and then grab your stuff, right?”

You should report fraud and other suspicious activity involving cryptocurrency to the following bureaus using these links:

Also don’t forget to report the fraud to whatever crypto exchange you used to complete the crypto transaction whenever you suspect or have evidence that bad actors are at play.